The festival ended with a range of more than interesting gigs. Yet after another three nights in a row short in sleep and days crowded with information, music and meeting musicians and managers, I was simply too tired to attend everything I had planned. I am quite confident that Mastodon gave an impressive show without my attention.

The weather had changed completely. It was warm, still windy and sun shone from a cloudless sky. It felt as if the sun was burning after the last days of rain and dark clouds. 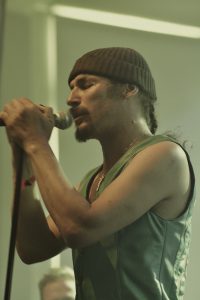 Good, old Udo Dirkschneider and his band shred the main stage in the burning sun. Sonata Arctica had an energetic gig at the tent stage and nearly hidden in the dim twilight of the Inferno Stage Jimsonweed delivered a musically weed-dripping and passionate show with their lead guitarist, Sami Yli-Sirniö. Even more hidden behind him, covered in smoke and red lights from time to time another well-known figure hit the keys, Santeri Kallio. It was a relaxed and easy-going atmosphere, and among the not too numerous audience colleagues, such as Ville Tuomio and Jan Rechberger paid a visit.

Before Sonata Arctica entered the stage, Noora and the guys of Battle Beast had given everything to warm up the crowd that proved to have an excellent party constitution. Actually there was no need for a warm-up.

In the burning sun on the Radion Rock main stage then Apocalyptica presented their 20th anniversary program of their debut album „plays Metallica by 4 cellos“. Their former member Antero Manninen had joined the band again so that actually there were four cellos and one drum set on stage. And even after 20 years, Apocalyptica play with the same power and passion although nearly literally being melted down. Still the Metallica classics were presented in the most unique Apocalyptica-way rocking the crowd, moving the fans and making them sing along even the last line.

Who thought the final gig, Sunday’s headliner Mastodon, were the end of it, failed utterly. Many clubs all over the town offered a final Aftershow Party and I attend that int Helsinki’s „On the rocks“. Ancara delievered to the growing audience of well experienced Tuska party people a passionate classic metal gig of authentic songs. And once again I found myself in a cosy because remarkably big number of fans when the last band entered the stage: King Company lead by Thunderstone’s singer Pasi Rantanen. And still there were fans being able to bang their heads and follow passionately the rhythm during all the show – after four days and nights in front of the Tuska stages.

My personal résumé? Well, I was taken by the show the kind of re-united Amorphis delivered. And yes, Tuska is a great place to meet the music scene of Helsinki (and around) and being part of this kind of family party. But my bottom line is, the festival is a bit too large for my own liking. It is, of course, small compared the major festivals in continental Europe and the UK. Granted. But gig slots of 25 minutes and no place for the media folks to do interviews off the music and some weird sparks in the atmosphere make me long for the cosy lakeside festival Nummirock. Let me explain that atmosphere thing. The audience is just as relaxed and the metal community is an open and peaceful bunch of people. But the on-site crew of Tuska is a bit more distanced and sorry, strict in an sometimes unfriendly manner. I do complain on a high level, granted. But being at Nummirock, fans and media folks alike never get tired to point out that the crew there is always friendly, helpful and supportive and by that professional in the very best of senses. This represents the spirit of metal music more than the business attitude you face at Suvilahti. These may be nuances. But you will feel them as both festivals follow on subsequent weekends. Anyway both festivals were a great experience and worth any while!

Stay tuned – for more galleries on single gigs of both festivals.

And listen to metal – best live at the festivals taking place all over just now.